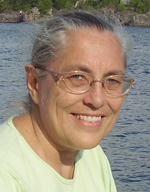 Daniel and Anne Garber Kompaoré serve in Burkina Faso and West Africa under Commission to Every Nation. A long time worker with the Mennonite Church (29 years with COM, AIMM, and Mennonite Church Canada), Anne, along with Daniel, transitioned over to CTEN in 2011 in order to facilitate their respective ministries: Anne serves as a free-lance Bible translation consultant, and Daniel serves in Christian education and pastoral leadership.

Here is a little bit about their story and their current work.

Gods call on my life evolved slowly throughout my youth as I developed a particular interest in other languages and peoples, a concern for true peace in this world, and a passion to learn and share these learnings with others. I was first introduced to Bible translation work and African languages while a volunteer in Zaire (now RD Congo) in 1975-76 where I visited four Bible translation teams, and asked a Bible translation consultant the qualifications required for a consultant. This led to training in linguistics, and in 1977, I sensed more clearly that God was calling me to work in linguistics and Bible translation among the Sicite people in Burkina Faso. Thus began a rich career analyzing the Sicite language and developing its orthography as well as helping to plant a church among the Sicite people, and later serving as a linguistics consultant with SIL Burkina, and as a Bible Translation Consultant with Burkina Bible Society.

While I still keep in touch with the Sicite people and the Mennonite Church in Burkina, today my ministry (WordShare Services and Resources) has expanded beyond national borders, as I train translators and check the quality of translation work for projects in various countries such as Nigeria, Senegal, Côte dIvoire, Congo (Brazzaville), and Mali. My resources, written in both English and French, are being used in places I have never been, such as India and Guatemala.

Daniel has had a long, rich and challenging life. As a six year old he helped his pastor evangelist father (the first ordained evangelical pastor in Burkina Faso1) train new believers to read in Moore, his mother tongue. They gathered around the evening fire, reading Moore, so they could study the newly published portions of scripture provided by the first missionaries.

After high school Daniel became a key participant in the newly formed denomination, Apostolic Mission Church2. Married to Ruth Kafando, they had five children, while he worked and studied, eventually finding a job as a primary school teacher at a mission school, then as a government teacher, and later, as administrator. All the while he continued serving the church, being ordained as pastor (part-time) in 1979, founding private Christian schools, and contributing to the holistic development of his church through the charitable organization he founded, Vision for Burkina. In 1986, his wife, Ruth, passed away.

In 1993 I was pleased to become Daniels wife and together continue to minister in Burkina Faso. The Sicite work was transferred to the newly formed National Bible Translation and Literacy Organization (ANTBA)3 of which Daniel was the cofounder and first director. From 2008 to 2013, Daniel also served as the head of the Apostolic Mission denomination. To this day he continues to teach in their Bible Schools and oversee his own schools and the church he planted in a new neighborhood of Ouagadougou, the capital city.

A few snapshots of our ministries

Our ministries take place in a setting where there is much political, religious, and economic upheaval where people are seeking a better life. Here are just a few examples of ministry opportunities granted to us here in West Africa.

About 20 years ago, Daniel felt led to minister to people living in rudimentary housing on the outskirts of the city of Ouagadougou. When the city expropriated the land, the church moved to two successive locations until it was granted a large plot of land. Today the Teedpaosgo Apostolic Mission church (also called the Apostolic Mission Church of Karpala) not only has a church building but also a primary school. It hosts a Compassion International Centre which ministers to the poor people of the neighborhood, subsidizing the education of their children, providing medical check-ups and afterschool programs which includes a spiritual component. Daniel has always been a strong promoter of leadership training within his denomination. He looks for opportunities to have young people trained in Bible schools. He leads the way by having younger pastors work alongside of him at this church. In addition to mentoring and pastoral leadership, we have been providing study bursaries for pastors in training, and contributing significantly to the building of church and school buildings.

Augustine was a very persistent orphan girl who has lived on our property during the last several years while she attempted several times to succeed in her accounting studies. When it became clear that numbers were not her strength, we asked her what she would really like to do if she had her choice. She said Social work. Here was a young woman who wanted to reach out to others who live in difficult social situations, just as she had! We provided a bursary that allowed her to begin her studies, and are delighted to hear that she is near the top of her class as her first year draws to a close (a two year program), and very excited for her prospects for the future.

The Ngas people of Nigeria have a well-established church in their homeland on the edge of the Jos Plateau. Their New Testament, published in 1976, awaits the completion of the Old Testament. Most of the books have been drafted but they need to be reviewed, revised, and then checked by a consultant. The Ngas people are becoming impatient with the slow progress of the translation. The younger generation even set up a Facebook page called Ngas Bible Translation Project where more than 1500 people have signed up and are asking When is the whole Bible going to be published? I have the privilege to help the work move forward by checking their translation and giving tips for improvement.

NOTES:
1. Papa Saana Compaoré, ordained by the Assemblies of God Church.
2. As a result of conflict in the leadership of the AOG church, in 1959.
3. Part of the Wycliffe Bible Translators family of organizations.

All Canadian AND American donations are tax-deductible.